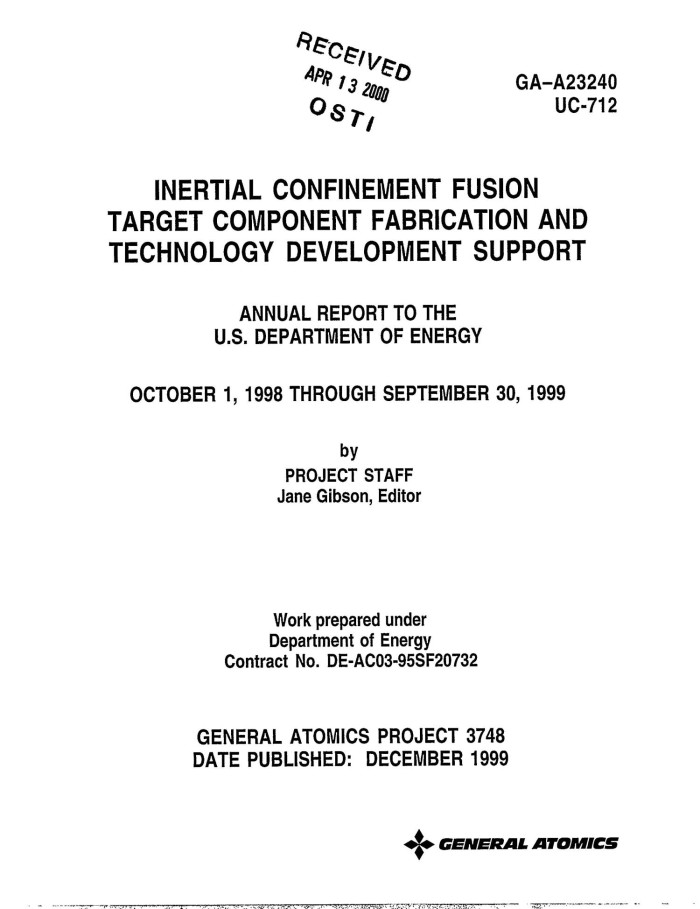 Contrary to predictions, Shiva fell far short of its goals, and the densities reached were thousands of times smaller than predicted. This was traced to issues with the way the laser delivered heat to the target, which delivered most of its energy to electrons rather than the entire fuel mass. Further experiments and simulations demonstrated that this process could be dramatically improved by using shorter wavelengths of laser light.

Further upgrades to the simulation programs, accounting for these effects, predicted a new design that would reach ignition. During the initial construction phase, Nuckolls found an error in his calculations, and an October review chaired by John Foster Jr. Even at those levels, it was clear that the predictions for fusion production were still wrong; even at the limited powers available, fusion yields were far below predictions.

With each experiment, the predicted energy needed to reach ignition rose, and it was not clear that post-Nova predictions were any more accurate than earlier ones. The Department of Energy DOE decided that direct experimentation was the best way to settle the issue, and in they started a series of underground experiments at the Nevada Test Site that used small nuclear bombs to illuminate ICF targets.

Each test was able to simultaneously illuminate many targets, allowing them to test the amount of x-ray energy needed by placing the targets at different distances from the bomb. Another question was how large the fuel assembly had to be in order for the fuel to self-heat from the fusion reactions and thus reach ignition. Initial data were available by mid, and the testing ceased in Ignition was achieved for the first time during these tests, but the amount of energy and the size of the fuel targets needed to reach ignition was far higher than predicted.

A great debate broke out in the ICF establishment as a result. Nevertheless, the authors were aware of the potential for higher energy requirements, and noted "Indeed, if it did turn out that a MJ driver were required for ignition and gain, one would have to rethink the entire approach to, and rationale for, ICF". The National Academy of Sciences review led to a reevaluation of these plans, and in July , LLNL responded with the Nova Upgrade, which would reuse the majority of the existing Nova facility, along with the adjacent Shiva facility.

The plans called for the installation of two main banks of laser beamlines, one in the existing Nova beamline room, and the other in the older Shiva building next door, extending through its laser bay and target area into an upgraded Nova target area. Throughout this period, the ending of the Cold War led to dramatic changes in defense funding and priorities. As the need for nuclear weapons was greatly reduced and various arms limitation agreements led to a reduction in warhead count, the US was faced with the prospect of losing a generation of nuclear weapon designers able to maintain the existing stockpiles, or design new weapons.

This would make the reliable development of newer generations of nuclear weapons much more difficult. Out of these changes came the Stockpile Stewardship and Management Program SSMP , which, among other things, included funds for the development of methods to design and build nuclear weapons that would work without having to be explosively tested. In a series of meetings that started in , an agreement formed between the labs to divide up the SSMP efforts. An important part of this would be confirmation of computer models using low-yield ICF experiments.

The Nova Upgrade was too small to use for these experiments, [50] [a] and a redesign emerged as NIF in In spite of the agreement, the large project cost combined with the ending of similar projects at other labs resulted in several highly critical comments by scientists at other weapons labs, Sandia National Laboratories in particular.

In May , Sandia fusion scientist Rick Spielman publicly stated that NIF had "virtually no internal peer review on the technical issues" and that "Livermore essentially picked the panel to review themselves".


Reis told the U. House Armed Services Committee in that NIF was "designed to produce, for the first time in a laboratory setting, conditions of temperature and density of matter close to those that occur in the detonation of nuclear weapons. The ability to study the behavior of matter and the transfer of energy and radiation under these conditions is key to understanding the basic physics of nuclear weapons and predicting their performance without underground nuclear testing.

Work on the NIF started with a single beamline demonstrator, Beamlet. Beamlet operated between and and was entirely successful. It was then sent to Sandia National Laboratories as a light source in their Z machine.

The physical scale of the facility alone made the construction project challenging. By the time the "conventional facility" the shell for the laser was complete in , more than , cubic yards of soil had been excavated, more than 73, cubic yards of concrete had been poured, 7, tons of reinforcing steel rebar had been placed, and more than 5, tons of structural steel had been erected.

In addition to its sheer size, building NIF presented a number of unique challenges. To isolate the laser system from vibration, the foundation of each laser bay was made independent of the rest of the structure. Three-foot-thick, foot-long and foot-wide slabs, each containing 3, cubic yards of concrete, required continuous concrete pours to achieve their specifications. The earth was so soaked that the framing for the retaining wall sank six inches, forcing the crew to disassemble and reassemble it in order to pour the concrete.

Paleontologists were called in to remove and preserve the bones, and construction restarted within four days. A variety of research and development, technology and engineering challenges also had to be overcome, such as working with the optics industry to create a precision large optics fabrication capability to supply the laser glass for NIF's 7, meter-sized optics. State-of-the-art optics measurement, coating and finishing techniques were needed to withstand NIF's high-energy lasers, as were methods for amplifying the laser beams to the needed energy levels.

Sandia, with extensive experience in pulsed power delivery, designed the capacitor banks used to feed the flashlamps, completing the first unit in October This required a redesign of the module to contain the debris, but since the concrete structure of the buildings holding them had already been poured, this left the new modules so tightly packed that there was no way to do maintenance in-place.

Yet another redesign followed, this time allowing the modules to be removed from the bays for servicing. Throughout this period the problems with NIF were not being reported up the management chain. In August that year it was revealed that NIF management had misled Richardson, and in fact neither claim was close to the truth. I don't want this to ever happen again".

A DOE Task Force reporting to Richardson late in January summarized that "organizations of the NIF project failed to implement program and project management procedures and processes commensurate with a major research and development project Early technical delays and project management issues caused the DOE to begin a comprehensive "Rebaseline Validation Review of the National Ignition Facility Project" in , which took a critical look at the project, identifying areas of concern and adjusting the schedule and budget to ensure completion.

The independent review supports our position that the NIF management team has made significant progress and resolved earlier problems". A new management team took over the NIF project [72] [73] in September , headed by George Miller who later became LLNL director , who was named acting associate director for lasers. Since the rebaselining, NIF's management has received many positive reviews and the project has met the budgets and schedules approved by Congress. In October , the project was named "Project of the Year" by the Project Management Institute , which cited NIF as a "stellar example of how properly applied project management excellence can bring together global teams to deliver a project of this scale and importance efficiently.

Recent reviews of the project have been positive, generally in keeping with the post-GAO Rebaseline schedules and budgets. However, there were lingering concerns about the NIF's ability to reach ignition, at least in the short term. An independent review by the JASON Defense Advisory Group was generally positive about NIF's prospects over the long term, but concluded that "The scientific and technical challenges in such a complex activity suggest that success in the early attempts at ignition in , while possible, is unlikely".

In May , the NIF achieved "first light" on a bundle of four beams, producing a By August 96 laser lines were completed and commissioned, and "A total infrared energy of more than 2. This is more than 40 times what the Nova laser typically operated at the time it was the world's largest laser".

On January 26, , the final line replaceable unit LRU was installed, completing one of the final major milestones of the NIF construction project [77] and meaning that construction was unofficially completed. On January 28, , the facility published a paper reporting the delivery of a kJ pulse to a gold hohlraum , setting new records for power delivery by a laser, and leading to analysis suggesting that suspected interference by generated plasma would not be a problem in igniting a fusion reaction.

After gradually altering the wavelength of the laser, they were able to compress a spherical capsule evenly, and were able to heat it up to 3. Siegfried Glenzer said they've shown they can maintain the precise fuel layers needed in the lab, but not yet within the laser system. As of January , the NIF could run as high as 1. Glenzer said that experiments with slightly larger hohlraums containing fusion-ready fuel pellets would begin before May , slowly ramping up to 1.

But first the target chamber needed to be equipped with shields to block neutrons that a fusion reaction would produce. By this time, so sure were the experimenters that ignition would be reached that articles began appearing in science magazines stating that it would be announced only a short time after the article was published. Scientific American started a review article with the statement "Ignition is close now. Within a year or two However, a number of problems slowed the drive toward ignition-level laser energies in the 1.

Progress was initially slowed by the potential for damage from overheating due to a concentration of energy on optical components that is greater than anything previously attempted. As the power was increased and targets of increasing sophistication were used, another problem appeared that was causing an asymmetric implosion. This was eventually traced to minute amounts of water vapor in the target chamber which froze to the windows on the ends of the hohlraums. This was solved by re-designing the hohlraum with two layers of glass on either end, in effect creating a storm window.