Get e-book Into the Fire: A Firsthand Account of the Most Extraordinary Battle in the Afghan War 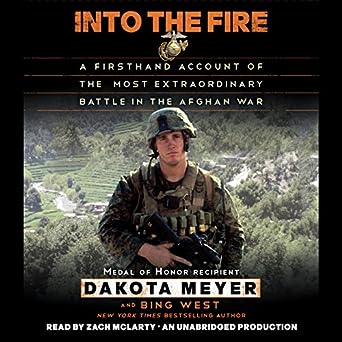 Those responsible certainly deserved the investigation into their conduct and decision-making, which occurred after the battle. At the very least, their example serves as a miserable contrast to Sgt.

Meyer and his fellow soldiers' valor. Prior to the description of these events, the book admirably describes the training and life events that led to Sgt. Meyer enlisting into the Marine Corps. Notably, the final chapters of the book provide an articulate account of how Sgt. Meyer came to terms, and indeed, continues to come to terms with the events of September described in the book.

This included the loss of several fellow Marines. A strength of Into the Fire is the skillful approach to writing that delivers Sgt. Meyer's story in a straightforward and personal manner.

In this regard, the fine efforts of fellow coauthor, Bing West, come through. West, himself a former marine and combat veteran of the Vietnam War, looms large in this reviewer's esteem as the author of The Village which details his experience as a Combined Action Platoon leader. He is also the author of several other books, most recently a book on Afghanistan entitled The Wrong War. Returning to Sgt.

Meyer's story, there is a humility and recognition of personal shortcomings that is admirable and, more importantly, real. As the war in Afghanistan winds down, Into the Fire is an effective reminder that there is nothing glorious about it, or any war.


In contrast, the efforts to help other soldiers and in Dakota Meyer's case, mostly allied Afghan Soldiers is inspiring and a model of selflessness. That is something, despite war, that is always worth remembering. Captain Nathaniel L.

Into the Fire: Dakota Meyer Medal of Honor USMC

Army Reserves. Captain Moir is a combat veteran of Afghanistan and recipient of the Bronze Star.

Enter your keywords. Author s :. Dakota Meyer. A group of Americans on a diplomatic mission to reach out to Muslims are pinned down by al Qaeda and come under overwhelming fire. They repeatedly call for support fire mission, which are denied because they cannot absolutely guarantee no civilians are in the area.

‘The Outpost,’ ‘Into the Fire’ look back at the war in Afghanistan

A frustrated American warrior disobeys orders to go on what appears to be a suicide mission to try to save them. No, this is not a rush-to-press account of the recent disgrace in Benghazi, But if you think Libya was a unique screw-up during the Obama administration, Into the Fire — the story of the Battle of Ganjigal, by Medal of Honor recipient Dakota Meyer and war correspondent extraordinaire Bing West — will change your perception.

As Benghazi and Ganjigal show, it's the unwritten policy of the Obama administration that civilian lives come before the lives of American soldiers even when there is only a slim chance bystanders will be killed. I first learned of Meyer's story while reading West's masterful The Wrong War , a scathing critique of how the Afghan War has become more of an ill-conceived welfare plan than an anti-terrorism fight. Among that book's most gripping chapters is the story of the ill-conceived and ill-fated Operation Dancing Goat which I'm sure is informally known as goat-something-else among those who participated.

Here, the rules of engagement and brass with no respect for the enemy's capabilities nearly led to a disaster that would have been much worse but for the unbelievable heroism of one Marine, Dakota Meyer. But Into the Fire , despite its subtitle, is more than just an account of that fateful day. Meyer sets the stage by telling of his complete tour in Afghanistan, recounting the successes and failures of training Afghan troops to take over their own security, and of the incredible strictures placed on American combat forces by their own command. Time and again, Meyer was constrained from engaging enemy forces by casualty-shy commanders who forgot the age-old maxim: force projection is force protection.

But even more frustrating were the rules of engagement that all but forbade contact with the enemy if civilians were part of the context, thus giving Taliban and al Qaeda forces the incentive to surround themselves with innocents. On the fateful day, the Marines were assigned to attend a shura think powwow, with tea as the peace pipe with an imam for whom they recently had built a mosque. Despite objections that the plan opened up their east flank — the flank that directly led to Pakistan, where Taliban and al Qaeda were holed up— the Marines were sent anyway, with a full complement of Afghan soldiers and border police.

They were ambushed by a large force, but even while Marines and Afghans were being gunned down, they could not get approval for a fire mission from Army artillery commanders.

Dakota, who had been left behind as a punishment of sorts for actions considered overly aggressive by the brass, sat in frustration back at the base listening to his comrades, both Army and Marine, beg for artillery and air support but denied at every turn. With Rodriquez-Chavez driving a HUM-V and Meyer fully exposed while manning the turret, they drove into the gauntlet, not expecting they would survive to return.


It was the first of five forays against overwhelming odds that Meyer would make that day. And if being exposed to enemy fire in the gun turret doesn't impress you enough, Meyer also spent a fair amount of one mission on foot. His weapons included not only involved the HUM-V's heavy mounted gun but also a variety of rifles and grenade launchers.

In one face-to-face moment while trying to rescue a fallen soldier, he killed a terrorist by bashing his head in with a rock.